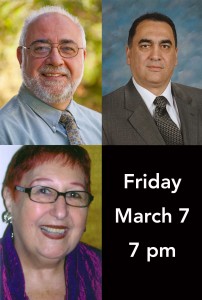 GLENDALE, CA Join us on Friday, March 7, 2014, at 7pm, for a very powerful panel discussion on the Challenges Faced by Armenian-American Youth Today, featuring panelists Dr. Emma Oshagan, Dr. Aghop Der-Karabetian and Mr. John Kossakian at the Glendale Central Library Auditorium, 222 East Harvard Street in Glendale. The discussion is in Armenian. Admission is free; seating is limited. Library visitors receive 3 hours FREE parking across the street at The Market Place parking structure with validation at the Loan Desk.

Dr. Emma Oshagan has a PhD in Clinical Psychology from the California School of Professional Psychology, and second PhD in Communication Arts from the University of Wisconsin-Madison. She is the founder of the Armenian American Mental Health Association and the director of the Armenian Program Development at the Pacific Clinics. For several years Dr. Oshagan was a professor of Communication at the California State University at Fullerton and Fresno. Dr. Oshagan has served as a Stakeholder, representing the Armenian community and the Pacific Clinics in County and State level Committees. Dr. Oshagan has received numerous awards and certificates of recognition from Armenian and non-Armenian organizations, including the Armenian American Chamber of Commerce, City of Glendale, State Board of Equalization, Los Angeles County Department of Mental Health.

Dr. Aghop Der-Karabetian is a Professor of Psychology and former Associate Vice President for Assessment at the University of La Verne, and Associate Dean of the College of Arts and Science where he has taught for the last 33 years. Dr. Der-Karabetian has a PhD in Social Psychology from the University of Kansas.  He has served on the Board of Directors of the Pacific Clinics for three years and is currently a member of its Armenian Advisory Board. He has conducted research on ethnic identity, especially Armenian ethnic identity around the world. He, along with colleagues, has developed scales of Armenian ethnic identity used by researchers. He is the co-founder of the Armenian American Mental Health Association based in Southern California.

John Kossakian is the principal of the Holy Martyrs Ferrahian Armenian School. Holy Martyrs Armenian Elementary & Ferrahian High School was founded in Encino, California in 1964. The historic founding of the school marked the establishment of the first Armenian-American educational institution in the United States. Kossakian has a Bachelor of Arts degree in Political Science from UCLA and a Master’s degree in International Relations from University of Southern California. He was the Manager and the Executive Editor of Asbarez Daily Newspaper from 1986-2001. Kossakian was also the Executive Producer of Horizon Armenian Television.